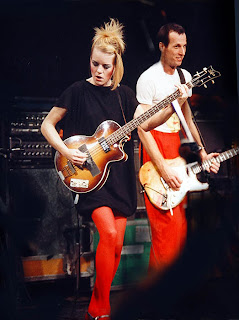 I've been stretched pretty thin at work and school and haven't had a chance to post here in a while. Never did get a round to posting that best of 2011 70 something song mix I made. It's still sitting there in 8-tracks though and I will get to it someday. Just wanted to drop in real quick and let my legions of followers know I'm still alive and kicking. Looking forward to coming back and posting some more great music as soon as a get a few minutes. Until then, here's a few videos about cars and guns and disposing of bodies and stuff.
Posted by eyeball kid at 9:01 AM No comments:

Here they are, in no particular order, the new records I have enjoyed most this year. Why 17? I made a list of over 70 records that I really liked this year and my goal was to make it as short as possible. I just started crossing stuff off until it started to make me uncomfortable. There just so happened to be 17 records left at that point. The only criterion to make the first list was that the record had to come out in 2011 and I had to like it enough to own it. I still felt bad crossing off a lot of the records on my list, so I made a mix of some of my favorite songs off of all the records in this post and one each from all the records I crossed off. I'll post that after a while. Happy new nuttin!
The War on Drugs--Slave Ambient Try Buy
WU LYF--Go Tell Fire To The Mountain Try Buy
tUnE-yArDs--W H O K I L L Try Buy
Handsome Furs--Sound Kapital Try Buy
Timber Timbre--Creep On Creepin' On Try Buy
Dirty Beaches--Badlands Try Buy
Girls--Father, Son, Holy Ghost Try Buy
M83--Hurry Up We're Dreaming Try Buy
The Rapture--In the Grace of Your Love Try Buy
Youth Lagoon--The Year of Hibernation Try Buy
Destroyer--Kaputt Try Buy
Tom Waits--Bad As Me Try Buy
Josh T. Pearson--Last of the Country Gentleman Try Buy
Fucked Up--David Comes to Life Try Buy
Drive--Original Motion Picture Soundtrack Try Buy
Disappears--Guider Try Buy
Ty Segall--Goodbye Bread Try Buy
Posted by eyeball kid at 6:36 AM No comments:

These are some of my favorite depressing Xmas songs to balance out the Xmas cheer delivered in the last post.
Posted by eyeball kid at 6:39 PM No comments:

Here's a little Xmas cheer for you. Merry Xmas.
Try.
Buy.
Posted by eyeball kid at 6:07 PM No comments:

It's been a while since I did one of these Mixtapes. I've been listening to The Who all morning and want to start this with "Eminence Front." It's a risky way to start and this has the potential to become very corny, very fast. Let's just see where it goes...
Posted by eyeball kid at 8:36 AM No comments: Something I've always historically done staying up late nights on holiday weekends was to sit in my parent's living room with my big clunky headphones listening to my father's copy of Quadrophenia. It was one of his favorite albums, by his favorite band. I can still see him walking around our house in his Maximum R&B T-shirt and his tighty whiteys coming downstairs after a night's rest as I'm sliding his Quadrophenia records back into their sleeves and preparing to finally go to sleep. I always wished I would have stayed up another hour or two and listened to the record one more time with him. I was a stupid teenager though and somehow, even though I was listening to his record and he was wearing a Who shirt for pajamas I never did, at the time, think of him as cool enough to hang out with. Have you ever seen that Louie episode where Louis CK rocks out to "Who are You?" in the car with his kids? Well, I've had that exact experience with my dad about a thousand times. I thought he was such a nerd. Now I'd give anything to rock out with him like that to "The Rock," or "The Real Me," or "I've Had Enough," or "Love, Reign O'er Me." Or to just sit and talk to him at dawn about which of Jimmy's four split personalities he liked best or what it was like to hear those waves rolling in for the first time on "I Am the Sea," or about the significance of water as a symbol in the greatest rock opera of all time. This one's for my dad.
"On a dry and dusty road/The nights we spent apart, alone/I need to get back home/ To cool, cool rain...I can't sleep and I lay and I think/The night is hot and black as ink/Oh god, I need a drink/Of cool, cool rain."
Try Disc 1.
Try Disc 2.
Buy.
Posted by eyeball kid at 11:51 PM No comments:

Email ThisBlogThis!Share to TwitterShare to FacebookShare to Pinterest
Labels: The Who

I've been so busy with school that I haven't even thought about posting here in a while. I've got some time off for Thanksgiving though and am wide awake at 2 in the morning. I spent the day napping and the night watching Netflix. Over the last few weeks, my only entertainment has been reading Everybody Loves Our Town: The Oral History of Grunge on the bus back and forth from school/work. I should start by saying I've never been a fan of grunge. I love Nirvana, but I think they transcend that Seattle scene that happened to spring up around them and never personally related them with grunge, as erroneous as that may be. To me, it's like saying the Beatles are rock and roll. The Beatles are The Beatles and Nirvana are Nirvana. The Who is The Who. You can't put bands like those into categories. So anyway, I bought the Oral History more as a tourist than a fan. It was basically research. And I downloaded a lot of records to listen to while reading on the bus--again, more research. I pretty much stuck to my guns though, and as much as I've enjoyed reading the book, I haven't come much closer to loving this music. I have happened upon an appreciation for the more Stooges-esque Mudhoney stuff, the heavy drone of The Melvins, and developed sort of a fascination with Mark Lanegan. But I still can't really say I like any of this music. As for Pearl Jam, I have never taken them seriously and even after reading the book, I still didn't think too highly of them. I have to say the book, kind of unfairly, paints them in a bit of a negative light. And I bought into it, cause I never really liked their music anyway. Tonight, though, I'm up late and I can't sleep and I just watched Cameron Crowe's Pearl Jam 20 on Netflix. I have to admit I was kind of blown away. There aren't many bands with their level of integrity and work ethic that are also, yes I will finally admit it, kind of awesome. Say what you will about me, but I am a convert. I like Pearl Jam. Warts and all. Pearl Jam's not Pearl Jam. Pearl Jam is grunge, but they're OK. First U2, now Pearl Jam. What next, Lady Gaga?
Try Disc 1.
Try Disc 2.
Buy.
Posted by eyeball kid at 11:10 PM 1 comment:

I need to get back to work, but I really wanted to post this too. I will have to let it speak for itself and just say it's great music to chill out to while riding alone in the back of a NYC cab on a cold, dark autumn night.
Try.
Buy.
Posted by eyeball kid at 10:13 AM No comments:

I've also been listening to a lot of Paisley Underground (The Dream Syndicate, Green on Red, etc.) records to help me cope with the stress of school. If Girls were the downer to help me unwind at the end of each long day then The Rain Parade are the stuff that makes me want to get out of bed in the morning. In case you've forgotten about this group, they were the best of the shimmering, jangly pop-psych that came out of the LA music scene in the early 80s. They didn't sell as many records as The Bangles (the most popular Paisley Undergound group), but I'd say they had the most talent and stand up better today than any of the other groups including The Dream Syndicate. If you haven't heard of The Rain Parade, think Nuggets, Seeds, Byrds, Syd Barrett-era Floyd, Revolver-era Beatles inspired "neo-psych" of the early 80s. I think this is a fitting description the Paisley Underground movement in general, but The Rain Parade were the best example of this sound. I couldn't decide which of their albums to post, because they're all so good, but frankly, I really like the cover of this one so that's how I decided. I highly recommend tracking down Explosions in the Glass Palace if you're into this record. Especially if you like the darker, VU inspired "No Easy Way Down" video below. Stand outs include "I Look Around", the "She Said She Said" inspired song that was probably their only hit. I'd say I wish these guys were still together, but Steve Roback left the band to form Opal which eventually morphed into Mazzy Star and what would the world be without Mazzy Star? This may be weird to hear, but Hope Sandoval is probably one of my top 5 favorite vocalists, songwriters, frontmen/women of all time. I don't think I've gone two days without hearing her voice for at least 3 minutes in years. If you don't agree, you should track down some of her solo records or some Mazzy Star records and give her a second chance. Or just wait...I'm sure some of them will pop up here eventually. Anyway, Rain Parade is quite good too. Enjoy.
Try.
Buy.
Posted by eyeball kid at 9:24 AM No comments:

Email ThisBlogThis!Share to TwitterShare to FacebookShare to Pinterest
Labels: Mazzy Star, Opal, The Rain Parade
Older Posts Home
Subscribe to: Posts (Atom)
The purpose of this blog is to promote music I like and open people's eyes and ears to something they might like. Please support the bands I mention by buying their records at your local record store or by going to their websites and buying music, merchandise and tickets to see them play live. My posts are intended to operate sort of like a radio station that actually gives people access to good music. My intention is to share stuff I like with people and encourage them to support these artists. If you've created any of this music and prefer that I remove any links, please let me know and I would be happy to oblige.